It was not my fault.  I blame the bracelet: 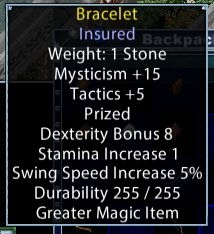 Another character happened to receive this as loot.  It looked really great.  "Gee, I wish I had a mystic weapons fighter who could use that."  I looked up my characters on Sonoma.  Reviewing them quickly I realized Erika was a vanilla Paladin Archer and Bowyer with her skills basically in the 50s.  If she eliminated her goal of 120 Resist Spells and became a partial Paladin, this could happen:

From what I have seen, Mystics don't need Resist Spells very much.  Between the passive Stone Form available at low levels and Cleansing Winds becoming usable as a journeyman mystic, you have counter to poison, bleeds, and many curses. Plus at 60 Chivalry, the Remove Curse spell will be cast reliably. (I doubt it would eliminate all curses at that level, but added to full-power Cleansing Winds, Erika should be okay.)

Please critique this build.  I know she would be a more effective adventurer without the crafting, but I like the archer/bowyer concept thematically.