Drakelord Posts: 1,550
May 2019 in Sonoma
Role Play on Sonoma Dead?
First a very short meeting of the current council of Sonoma.  I really wish these meetings were on first Sunday of the Month where the counsel could elaborate more on upcoming events and not the very last event of the month. 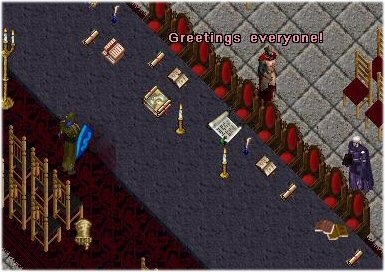 King Blackthorn: Greetings everyone! Please have a seat I see that we have a small group tonight Lets get started as usual. With a report of the city's from our governors Lavendar how goes Vesper?
Governor Lady Lavendar: Vesper is doing well but the pirates have been getting ever bolder I had reports that they had invaded the city this past week.
I was glad to hear there was good turnout to turn them away but then they returned in the later part of the week.
That group was led by a Captain O'Gar I believe we prevailed again but I fear the incursion of more pirates.
Many citizens have fought the pirates at sea and have kindly been returning the stolen cargo
to the cities so I am happy to report that our coffers are once again able to pay for the trade deal.
Other than that, we see summer approaching and hope we may find the city safe from further incursions.
King Blackthorn: I am glad that the pirates were thwarted.  I was surprised to hear how bold the pirates were attacking Vesper but was happy to hear reports that our citizens fought back.
From my understanding they attacked a shipment that made it to town burned down the ship then pillaged the town but the citizens fought them back however it was a diversion to let the pirate ships escape with the loot the hide out was discovered and the goods were returned.
I am sure the pirates will think twice before being so bold again.  Have you any reports from the other governors?
Lady Lavendar report that she had not heard from any of the other Governors and went on to remind all of the coming elections starting in June.  King Blackthorn then announce “Well, I guess I can safely call the meeting to an end, unless we have more to discuss?”  There was none.
City Elections are schedule to start soon.  The Nomination period will start 1st of June and will last one week (Real Time) https://uo.com/wiki/ultima-online-wiki/gameplay/britannia-loyalty-and-councils/ with one week of Voting (real Time).  The position is held for six months.  There are empty seats on the Sonoma Counsel, and with the problem of weekly payments for trade being solved I hope to see the return of a grand counsel on Sonoma.  I plan on running once more.
So Sonoma, prove me wrong.  Is Role Play dead on Sonoma?  I hope to see more folks at future meeting of the Governors!
Remove Trap = Bad News
for
Treasure Hunters
Drakelord#5598