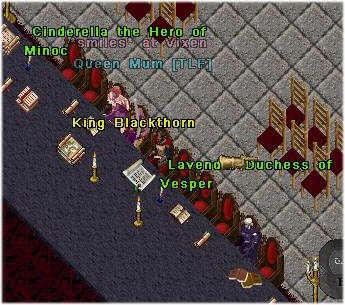 King Blackthorn:  King Blackthorn: Ahh here comes more!  Greetings Vixen.
Vixen: *waves*
Lavendar: Hail Vixen
Queen Mum: *smiles* at Vixen
King Blackthorn: Tonight will probably be a short meeting as usual but lets get started.   Cinderella what have you to report tonight?
Cinderella: well the women of Minoc have been talking about the tale of two cupids.
King Blackthorn: Oh?
Cinderella: one was good and handed out gifts to the people who gathered on Valentine's day
and the other wasn't quite so nice.
King Blackthorn: Ah I see
Cinderella:  Some nasty Cupid like creatures were attacking the sheepherder and his sheep over at Trinsic
King Blackthorn: Ah I see
Cinderella: and the royal guard was sent to help them out
Queen Mum: *poor sheep*
Cinderella: we are glad that they were dealt with other than that, all is calm thus ends my report
King Blackthorn: Thank you for your report.  Glad the evil cupids were handled
Cinderella: *nods*
King Blackthorn: Queen Mum what have you to report tonight?
Queen Mum: Well it seems we have a bit of a cold and flu virus going on.  So we have gathered many batches of honey and tea leaves as possible
King Blackthorn: You sure it's not the "love bug"  *snickers*
Queen Mum: Wish it was!  Better kisses instead of sneezes
King Blackthorn: *nods*
Queen Mum: So we have been providing the citizens with cold potions and hope it will soon pass.
King Blackthorn: Well, we should try and keep it it under control.  We don't want an epidemic in our hands
Queen Mum: aye, we don't want it to spread to other cities and keep slippers on!!  Other than that mess we are doing well and wait anxiously for Spring
King Blackthorn: Be sure to have our chefs cook up some chicken soup as well
Queen Mum: Oh thank you, I will do that ...
King Blackthorn: Alright.  Thank you.  Lavendar what have you to report?
Lavendar: Good evening.  I also noted the visit of the Cupids and thought the creatures brought were very clever as they kept changing into a likeness of one of us so we had trouble distinguishing friend from foe
King Blackthorn: Those cupids can sure be tricksters at times
Lavendar: But as Cinderella has said, the invasion of the creatures was temporarily put to rest Unfortunately I did not see the final battle and was sad to have missed it.  Vesper is recovering from a very cold spell and looking forward to spring.  Otherwise all is well.  Thank you.
King Blackthorn: Seems many are suffering from illnesses lately well, thank you for your report.  I will have our royal physicians keep a close eye on this illness that is spreading.  To make sure it doesn’t get out of hand and am very pleased the rogue Cupids were dealt with swiftly.  I don't have much else to report tonight myself but I would like to open the floor to everyone.  Does anyone have anything they would like to discuss?  Vixen have you anything for us?
*Cupid let loose her arrow*

Vixen: Sorry, I have nothing to say at this time sir but thank you for asking
King Blackthorn: Alright then If that is all, then I will close tonights meeting a bit early.  But Xanthus does have a couple things for you by the statue in the courtyard.  He would like for you all to head there after the meeting
Queen Mum: *heads off to the Royal cook to request chicken soup for citizens*
Lavendar: Thank you, Your Highness.
King Blackthorn: and with that, you are all dismissed