The results of Broken Promises and Kampus​

Drakelord Posts: 1,636
February 2019 in Sonoma
The results of Broken Promises and Kampus​
Sonoma has a rich history, but is one of the very few shards that has a very small population, proof of that would be the large housing areas available in Malas. More and more folks are leaving this world, only to return with EJ. And why not, of course they cannot own a house nor will they be able to get a drop from a boss, but why do they care? They have no full access to bank, but can purchase a vault space to store items. What concerns would they have except maybe for the enhanced apple or orange petal.


Today council of governors (Sonoma) is the smallest I have seen in a very long time. At one time we had a full council (for the short period). I was a member, more on that later. Promises were made by the King during those early meetings, promises that the Dev’s had told the puppet King to say, each city would receive a boon, an upgrade to a area picked by the then governor of that city. Governors did ask, but none were granted. In turn the Governors lost faith in what they thought was a fair and just request for their city. So they gave up asking and when the term of governorship came due, they did not renew the oath of office and quietly left returning to the world they new best, playing the game. 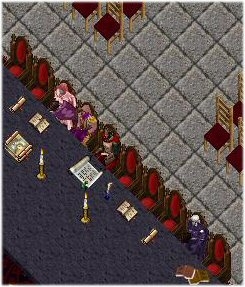 The few Governors that do sit at the council table, three are friends and two had very grave concerns of returning to office, mainly because of requests made by previous governors who are no longer governors. Now mine story, I choose to run for Governor of a city to sit at the council table, to be a part of the role play that was there, my first attempt was for the City of Trinsic, I lost. When it came time to try once more (every six months) I ran for Moonglow and won! At that time we were told of the city request and that Yew was to be first, each and every time a request was put in it was refused. I had so hoped to get Sonoma Moonglow’s Councillor building to look like Sieges that I even went and purchase with my turn in points items for it, I am sure if the mailboxes of the HOC and the Reward hall were checked they would see boxes containing items for Moonglow. They welcome to use them on Moonglow anytime.

Now Trade runs and trade deal. I am a firm believe that the trade deals for the city could be lower as two million a week is a lot of gold to pay on smaller shards. Or better yet charge the individuals that click on the stone for the trade deal a small fee of 5k for 24 hrs. During Kampus we saw a huge boom to trade runs for most cities, EXCEPT Moonglow and Magincia. Why? Because you had to run or SAIL to locations to receive credit, no shortcuts like traveling to Moongates. I like doing the trade runs and will continue to do them. But it will be for cities where I have a good chance of getting the guild signs, I hate sailing.

I would like to wish the current governors good luck and may they attained all they wish while they serve in that position.