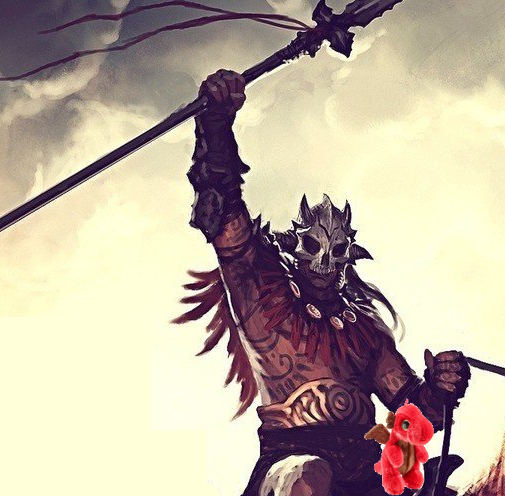 The citizens of Delucia had responded to the bellowing call, and now stood around the town square looking puzzled.

Before them stood a tall, muscular man, wearing furs and bones, his helmet carved from the skull of some hapless troll.

“I’ve got bread baking! Get on wiv it!” yelled a rather rotund lady, her arms covered in flour.

The man glared at them. “As of today, I am your master!” He bellowed. “This town, and all in it, are mine to rule!”

“Right-o” said a shepherd “You have fun doing that. I hear the last overlord left the paperwork in a terrible state.”

“That’s right!” said another farmer “The town census is completely out of date, the health and safety committee disbanded a decade ago, and have you seen the state of our roads?”

“What are you going to do about the wandering orcs?” asked the innkeeper’s wife “They keep defiling my vegetable garden! And the fishing nearby’s been terrible this year! If you’re our ruler, you should do something about that”

The large man looked around in bewilderment, and then raised the strange staff he held aloft. It was made of small skulls, all held together by a central pole. It began to glow, and then burst into flame.

“That’s a good trick!” remarked the stable boy “Our new ruler’s going to be great fun at our annual cattle drive!”

“Silence! I am your ruler! And – and – and – I don’t do paperwork!” screamed the would-be dictator. “Fear my dragons! I am – The Dragonlord!”

A very small pink dragon flapped over the town walls, and settled on his helmet. “Bukaaawk?” It asked, before coughing up a very small, barely glowing coal.

The crowd collapsed in laughter and went back to their daily routines.

“I’ll show them!” complained the Dragonlord, “They’ll regret not showing me the proper respect!”

He stomped out of the town gate, still wearing a pink dragon-let atop his helmet, fiddling with his staff* as he went

Shortly afterwards, there was a massive explosion from just beyond the town walls, and a pink dragon could be seen shooting skywards at an impressive rate.

Then, the air was filled with terrifying roars, and the ground began to shake…

“I wonder if our new lord and master would like some doughnuts?” wondered the baker, as bits of exploded dragon started to rain down on the town.

Far outside the town, a soot-covered figure could be seen fiddling with his rod.**

**still not a euphemism.