Tanager Posts: 634
April 2018 in Siege
The City of Jhelom has long been known for its mercenaries - skilled fighters willing to hire out to the forces of virtue and vice alike. Some fight for coin, others fight for a cause. And then there are those who simply enjoy a fight for its own sake. Whatever their reasons, they all fight with courage. For this, Jhelom has come to stand for the virtue of valor.

Valor can be defined as having great courage in the face of danger, especially in battle. Valor, though, is more than just war. One does not need to be a skilled warrior to be a brave one - nor does one need to wield a weapon to be courageous in the face of danger. Valor can be found in many ways. It can be a warrior's sword arm, a tamer's skilled companion, a bard's bold songs, a mage's clever spells. Valor can even be found in the vices of Sosaria, for thieves and murderers have their own tales of daring adventures in the face of impossible odds. There is courage to be found in the skilled crafters of the land, who brave the treacherous forests, caves, oceans, and monster lairs in search of fine materials with which to ply their trade.

I will be asking King Blackthorn for the vacant seat of Governor of Jhelom this coming weekend for what remains of the term.

As Governor of Jhelom, I would invite any and all brave souls to join me in making the city shine with valor in all its many forms! We would seek a Trade Deal with The Merchant's Association, to benefit from greater regeneration of mana. The citizens have a voice, however, and this can be changed. There will be celebrations and contests. I plan to make Jhelom known for more than its fine weapons!

This month, I have been passing out my trademark ''buttons''

For the remainder of the week, expect to find more of these all across the lands! 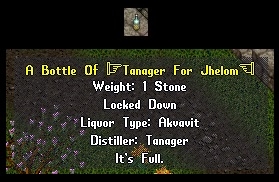 Any others who wish to run for the office are free to do so! How you would benefit Jhelom?